Because it's NOT ANOTHER FUCKING NEWSLETTER

- it's a FUCKING sales ENGINE!

Learn how to ENJOY writing emails… even if your subscribers have forgotten who you are and KNOW that you can have SALES in just 20 minutes!

NOT ANOTHER FUCKING NEWSLETTER is a 4 Week Home-Study program to teach you how to train your SUBSCRIBERS to be BUYERS!

You've got a list... but you never email and now it's been so long since you emailed them you think it'd look weird... so you ignore it.

... and you're STILL paying for the damned software!

You can't remember the last time you sent a newsletter and now the pressure's mounting and you're paralysed by what to send... and will it look flaky as it's been so long?

It's been so damned long since you last sent your list an email and the pressure is mounting on you to "re-engage your list", but you haven't got a fucking clue what you're going to say - and now you just feel obliged to write an email... not excited!

What if they unsubscribe when you hit SEND?

When you do pluck up the courage to write an email, you want to vomit when you hit the SEND button. You immediately slam down the lid of your laptop and "remember" an errand you need to run - running out of the house so fast you almost forget your purse!

You've heard "the money's in the list" and you HAVE  people on your list - but your subscription is just ANOTHER thing you're paying for every month without making a return and you're not making a DAMNED PENNY from your subscribers!

Writing and sending an email to your list doesn't feel fun anymore, it just feels like ANOTHER obligation and ANOTHER millstone around your neck - even though you actually LOVE writing!

You know you're supposed to really connect with your audience and you want to have that "like, know & trust" factor - but you’re scared if you show the real you, they'll think you're "the weirdo on the bus”!

You’re scared to actually sell in your emails because you’ve been so inconsistent sending newsletters, you feel it would be weird… and you’re still trying to make everyone like you and be your friend and you don’t want to piss them off by asking them to buy.

You've tried saying what you THINK you should be saying... but the words didn't flow from your fingers so you bought some email templates, but... after you sent the first one, you never bothered again because they felt so out of alignment with your own voice - and you knew it was ick!

When you sign up to a newsletter and find yourself in free-fall into someone's DESPERATE funnel - you can't decide whether to curl your lip or recoil in horror at their 1000 word SAD LIFE ESSAY [tm].

It's just not fun anymore.

NOT ANOTHER FUCKING NEWSLETTER

I want to help you learn how to LOVE SENDING NEWSLETTERS, to HARNESS the POWER of EMAILING your LIST... and how to do it - in YOUR OWN VOICE... without the ick-factor!

In just 4 WEEKS you'll learn how to write to CONNECT with your AUDIENCE in a way which is AUTHENTIC to you, but never forgets - that you are a BUSINESS whose job it is to SELL your STUFF!

You'll learn how to move accept and move past the fear of NOT KNOWING WHAT TO SAY or worrying whether your audience will "like" you.

With audio lessons and worksheets to help you TAME YOUR LIST...

Here’s What You’ll Get When You Enroll

When you join you'll get instant access to the training materials and you'll also get audio lessons to and writing prompts to make sure you're on track with re-engaging your list and creating your Sales Machine.

It’s a 4 WEEK course designed to help you get over the fear of actually writing an email and asking for sales complete with prompts, psychological and marketing truisms and real-life examples to help you nail your message and create newsletters which make you HAPPY... and CONVERT TO SALES!

Every day you'll receive a prompt detailing the next steps to take for creating your message all the way through to hitting the SEND button. On top of that, your daily audio will talk through the psychological and marketing strategy behind your daily task so you fully understand the HOW and WHY - and not just the WHAT you should be doing.

By the end of 4 WEEKS you will have confidently re-engaged your list - and ASKED FOR THE SALE! - and know that your STRIPE PING is only ever 20 minutes away!

Sending newsletters will never again be at the bottom of your "To Do" list because you'll ENJOY writing them and take ALL the EMOTION out of the "oh fuck they unsubscribed!".

We take a deep dive to understand why you've not been comfortable fully engaging with your LIST or asking for the sale.

We work to create an unshakeable mindset and confidence so that you KNOW your customers are just WAITING for someone like you to come into their lives and offer YOUR solution!

Fully embrace your story, your mission and your message.

GET COMFY WITH STORY-TELLING

Learn how to craft a message you know your audience will enjoy reading because they love the way you write and the way you tell a story.

Discover how to find inspiration from every day life doing regular things but know how they connect to your audience with a shared experience, wisdom and humour in a way which is uniquely you.

PULL UP YOUR BIG GIRL PANTS AND SEND A SALES EMAIL

I know, I know - it sounds SCARY AS FUCK!

But you need to do this.

This week you're going to SEND your OFFER to your LIST telling them WHY it's so FUCKING AWESOME - and why they'd be FUCKING CRAZY not to buy it RIGHT NOW!

I'm going to show you how to sell in your emails WITHOUT being a sleaze-bag!

YOU'RE A FUCKING MAESTRO MAVEN WITH A KEYBOARD!

This week is all about TOTAL CONTROL.

Knowing that you've TAMED YOUR LIST and that ANY time you want a CASH INJECTION you can send that email out... and it's YOURS!

We perfect the NEVER-SLEAZY, ALWAYS HELPFUL, but NEVER shying away from ASKING FOR THE SALE - and you are at the mercy of NOBODY'S algorithm.

By the end of the course you will be comfortable REGULARLY writing and sending a SALES email  - and it's only going to take you 20 minutes!

You'll have mastered sending a friendly newsletter and know that your audience like and trust you and smile when YOUR email lands in their inbox!

No guilt, no shame and NO second-guessing yourself - your newsletters will become a regular part of your marketing strategy which you'll no longer dread!

Everything Changed for my Business

I used to go for months without writing to my list... even though I was paying a subscription EVERY DAMNED MONTH just to have their email addresses...

I didn't know what to say. I didn't know if what I wrote would be 'right' - and I DIDN'T want to be 'THAT WOMAN' who emailed and asked for the SALE.

Everything changed for me when I:

Now it takes me around 20 minutes to write an email, ask for the sale and HIT SEND and I KNOW I'm doing it right - because EVERY time I send my newsletter, my clients hit REPLY!

These days I LOVE writing emails because I KNOW what I share is valuable and that my clients WANT to hear from me. 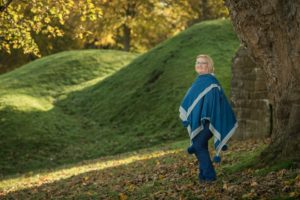 It doesn't get shut down because you fall foul of auto-censorship and it still works even if Social Media is being a dick and your ad person has gone AWOL!

89% of marketers use email as their primary channel for generating leads!

86% of professionals view email as a priority connection.

47% of marketers view email as the most effective marketing channel. (39% for Social Media, 33% for SEO and 33% for Content Marketing).

The CROWNING GLORY in your SALES ENGINE

Being able to write GOOD emails whenever you need to - FAST - means that you are ALWAYS only ever 20 minutes away from a SALE!

WHAT DO YOU NEED TO GET STARTED?

You need a newsletter autoresponder (e.g., Convertkit), something to sell - AND your payment processors ready to take payments!

HOW LONG WILL IT TAKE EACH DAY?

It's going to work on a sliding scale. The first week, I expect it will take you up to 60 minutes a day to pull your thoughts together and have the confidence to type out your email!
By Week 4, it should take you around 20-30 minutes to write the entire email - AND hit send!

WHAT IF I'M NOT VERY GOOD AT WRITING?

Not many of us are capable of writing "Anna Karenina"... but what we can do is write in a natural way which genuinely connects with the people reading our emails.
I fully believe that the message is more important than the SPaG (Spelling and Grammar) - but there are wonderful tools out there online to help you with your SPaG if you're worried about it. But please, concentrate on your message - not literary awards!

Alex is an expert strategist with a flair for expressive writing which connects with her audience and evokes emotion.

She believes in the power of harnessing the written word and using it to demonstrate expertise, confidence and clarity when marketing online businesses.